Amazing.......and I am now more thankful for Sugar! 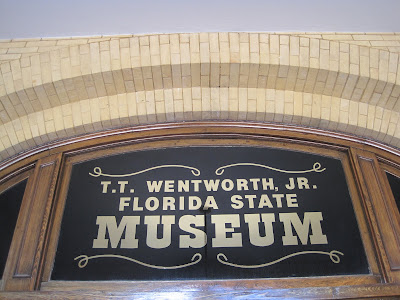 I found this museum through this website (yep, I use it too). I sat down Thursday afternoon and looked through the pages of this site to find something within about an hours drive that my family & I could do on Saturday. There were a few selections but I decided on the T.T. Wentworth, Jr. Florida State Museum because it looked like something my kids and my Mama would enjoy.

We arrived in Pensacola around 10am, which is when the museum opens. It is a block or so from the beach, which you can add to your adventure for the day. It is more than a museum (although a museum is included). It is actually a historical village of period buildings that you can tour. Some are original/refurbished and some are recreations. The area is beautiful and all the people who work for the museum are dressed in period clothing. 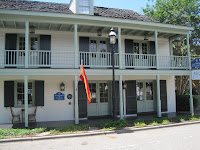 You enter the village store greeted by its attendant, then he explains where to go, what to do, what to see, and what time the walking tours are available. He provides you with a map and you are on your way.

Our first stop was the actual museum just down the street from the village. It's three stories of interesting artifacts and stories with a hands on children's exhibit on the third floor. After well over an hour in the car (stops for breakfast & ice for our cooler) with a 7 & 9 year old and before we went to the "do not touch zones", this was where we HAD to go first. 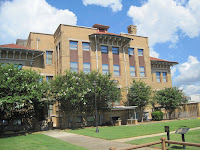 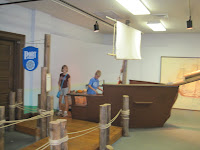 It is so cool. Clothes to wear, a fort to man, a cottage to live in, a general store to shop, a ship to sail, an Indian camp, and I'm sure I am forgetting something. My son did not want to leave. I believe he would've played there all day but they had a birthday party booked so we had to move on. (Thank God because we wanted to see everything else:)

From here we went on a tour and learned exactly how awful it was to live during that period. They had to eat bad meat, sleep on rope beds, and share a piece of sugar that was in someone else's mouth or mouths because it was so expensive, you could not waste a drop of it. (Thank you, Lord, for all my blessings - electricity, refrigeration, my Sealy mattress, and Domino's sugar!) Of course, we also saw the beautiful furniture, decorative pieces, clothing, and the amazing way they conserved everything. We think we know recycling - these people were the masters.

After the tour was over, we went to the Museum of Commerce. My kids participated in candle-making with Ms. Kimberly who was formerly a laundress but turned her life around. While they made their candles, my Mama & I had a chat with Mr. Stewart who was the school teacher and a loyal British subject. After he regained consciousness over seeing me in shorts (women were not to expose their ankles so I was beyond risqué in my shorts) we talked. The year was 1787 (as we recall) and Mr. Stewart was indignant about the rebels who lived in the 13 colonies led by Washington. He thought is was ridiculous that they didn't want to pay taxes and that they wanted representation. He said they were like "spoiled children". He stated that they had freedom as long as they followed the decrees of the king. It was very interesting. I couldn't help but think how sad it is that we've strayed so far from the beliefs and convictions of our founding fathers (those rebels). Many in America talk like loyal subjects instead of free Americans. (okay, off the soap box. This is about fun!)

From here I'll spare you a play by play and just share the pictures of some of the things I enjoyed seeing and learning.


Fast-forward a few hundred years and inside the T.T. Wentworth, Jr. Museum there were several items that I owned as a child. Wait.......what? I'm not old enough for my things to be in a MUSEUM! Apparently, that is false. I'm still not old. Period. Do you hear me?